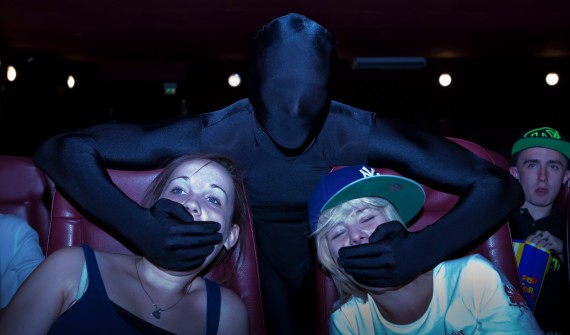 An idiot next to you in a movie hall can ruin your movie experience but an idiot with a cell phone can ruin the movie for a lot of people, since an idiot and his cellphone are not parted a cinema in London has employed Ninjas to show them some manners. Unfortunately they don’t throw Shurikens at the idiot but they swoop down on him and question his behavior. The so called Ninjas are actually volunteers in black skintight body suits who make your life better for a free admission. Abdul Stragg recounts his experience as he was stopped by the Ninjas.


I normally hate noisy people in cinemas, but I got a call from my friend just as the movie started and thought I could get away with taking it. The last thing I expected was two completely blacked-out people suddenly appearing by our seats and give me and my mates a warning to shut up. It was actually pretty terrifying at first, but then I realised it was a bit of a laugh and a great way to make it clear what I was doing was having an impact on those around me. It certainly made me hang up and shut up for the rest of the film.