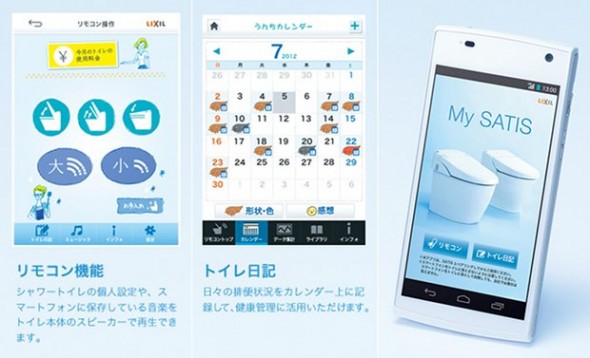 Lixil Satis toilet from Japan can be controlled by your smartphone

Lixil has identified the craving for sophistication in toiletries and so has moved on to conjure the Lixi Satis toilet concept. There are three of these extremely smart toilets that are expected to find their way into common homes. The toilets will be controlled by an Android app and with Bluetooth connectivity tied in, features such as remote flushing and lifting of the toilet seat will be a touch away. You can even play music through the in-built speakers while the toilet monitors your ‘usage history’.


It’s always good to have a toilet that can predict your water usage and electricity usage bills. The three new Satis toilets will be released by spring 2013. February is a great time to take a dump the smarter way. However, this little Japanese ‘dump’ling could cost you an arm and a leg. The prices range between ¥199,500 to ¥389,550 (that’s about $2,385 to $4,657).