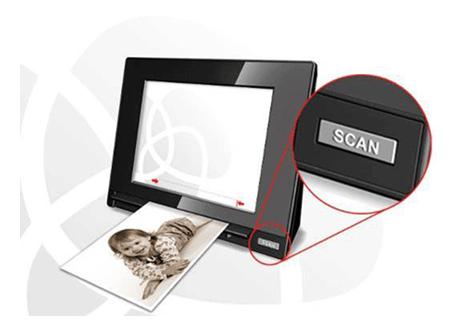 LiteOn Memoir – A digital photo frame with a scanner on board

The LiteOn IT Memoir is an 8-inch digital photo frame featuring a built-in scanner, which the company is launching worldwide under its new brand Skyla. Memoir is the first scanning-enabled digital photo frame to be launched worldwide. The built-in scanner supports scanning up to 1200×1800 pixels (2.16-megapixel) allowing hard copy photos to be digitized and stored in the Memoir’s built-in 1GB memory enough for around 2000 pictures. More pictures can be transferred several ways, namely either via the USB 2.0 interface, the built-in 5-in-1 memory card reader (SD / MMC / MS Pro / xD / CF), or that scanning unit. The device sports a very user-friendly and intuitive control system, which consists of a smart touch pad that allows users to edit, file, and browse through digital photos, as well as a remote control. Moreover, the digital frame has even been equipped with an ambient light sensor, which automatically adjusts backlighting controls to the room’s lighting control.

The LiteOn IT Memoir is already for sale in Taiwan for approx $220, worldwide shipments will begin later in this month.
Via