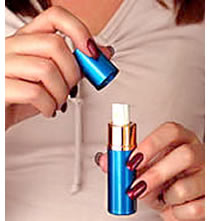 While the crimes rates are rapidly shooting towards the sky, its time for all the gals to shed their “weaker sex” tag and be on the self-defensive stance 24/7. so if some filthy eve-teasing going around you or even some nasty guy comes and threatens you, take out your weapon, Lipstick Pepper Spray and render him helpless for 40 minutes. Don’t expect this lipstick to brighten your smile with a raspberry or cocoa hue, instead the lipstick will make your day better by grabbing the worry of self-protection. This pepper spray which looks like an ordinary lipstick contains a 10% concentrated Pepper spray. Each tube contains roughly six one-second bursts of 10 percent OC, the active ingredient in pepper gas that’s derived from the hottest part of the habanero pepper you just have to remove the cap and aim it on the face of the antagonist and the spray will spew the irritant at the distance of 6 to 10 meters.

The non-lethal, inflammatory agent works by forcing the eyes shut and inflaming the respiratory tissues leaving the criminals choking for about 40 mins…well this time is enough for you to pick up your things and look out for the police. It also has the invisible UV marker enabling you to identify your attacker to the police. The idea is similar to the one used by the police forces to nab their criminals. Barely three inches wrong, you can keep the pseudo lipstick in your purse or stash it inside your pocket.
The shiny metal tubes are available in five fashionable colors: red, silver, pink, blue and black. They cost anywhere from $9.97 to $19.95 and can be ordered online.
So you can help your friends in the crisis and hear them say ”Power puff girl saves the day” !
Via – Gizmodo