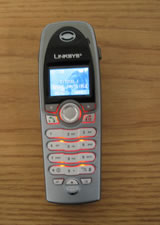 Linksys has partnered with Skype to offer a cordless DECT 1.8-1.9Ghz phone complete with a backlit color display, backlit keyboard, and other features, called the Linksys CIT200 Cordless Internet Telephony Kit. The Linksys CIT200 is tightly integrated with Skype utilizing the Skype API for not just making and receiving calls but also accessing your Skype contacts and profiles. At some point today (Tuesday), Skype and Linksys will officially announce their partnership and the official launch of the Linksys CIT200. A USB base station acts as the “go between” communicating with both the PC (running Skype) via USB and with the CIT200 using the DECT standard. The Linksys CIT200 Cordless Internet Telephony kit has a suggested retail of $129.99 but you can probably find one for $99. Retailers carrying the product include Radio Shack, Staples, Amazon, Fry’s, Newegg.com, and others.