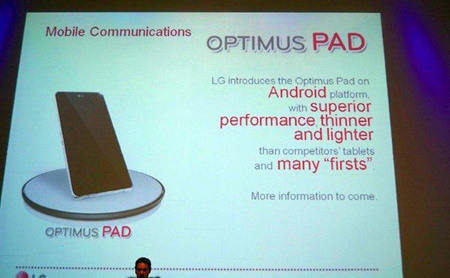 LG’s tablet may arrive early next year with Honeycomb

LG are all set to bring forth one of the better tablets that we have seen. The LG Pad is a powerhouse with goodies such as a tablet-exclusive version of the Honeycomb operating system. As if that wasn’t enough they added a lot more like an 8.9-inch display screen and a dual-core Tegra 2 processor. It seems to be directed to both American and European markets. Do not get your hopes to high because LG seem to have called this off graciously and so have their PR.

There’s no telling as to how true these rumors may be but it’s sure that this one will come in by the first quarter of next year.
Engadget