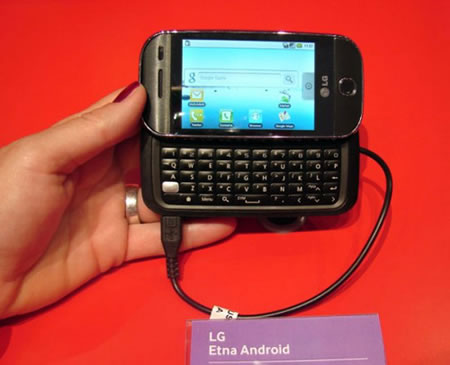 Keeping alive the hopes of an Android offering from their garage, LG drives forth their first venture with a bit of veil still hanging over it. Besides the pseudo name, ‘Etna’, and the bunch of tempting specs we don’t have too much to lean back on for more on this one. It’s a QWERTY slider with a 5 megapixel camera, GPS, Wi-Fi and 3G. The other suspects make it into the spec sheet comfortably. The keypad looks good and so does the 3 inch touchscreen. Fans will still have the mystery of the GW620 in mind as they hope for another Android wonder.

Let’s hope we see the phone sooner than later. It can be expected before this year passes by. For now, the phone has been reviewed by Chip, Germany.
[Electronista]