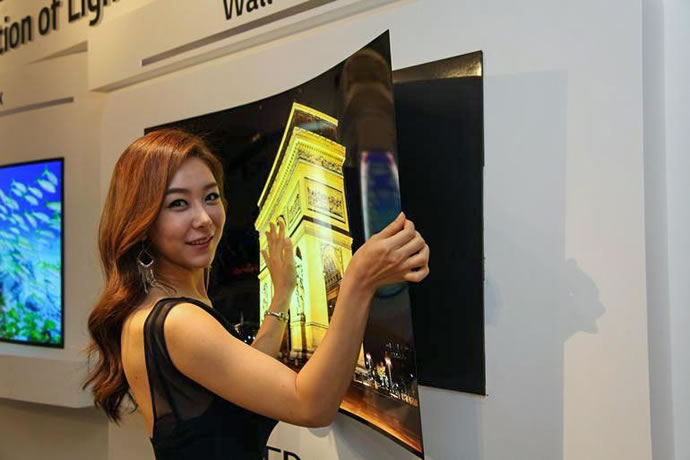 LG’s paper-thin OLED HDTV is .93mm and sticks to the wall like a fridge magnet

The era of ultra thin televisions just took a deep breath and exhaled with a sense of fulfillment as LG recently unveiled a TV screen that is… wait for it… less than a millimeter thin. Essentially we’re talking about a panel that’s paper thin and, let’s face it, jaw droppingly fantastic. So far the South Korean tech giant has succeeded in producing a 55 inch OLED panel that measured a mere 4.3mm in thickness but this is what true-to-life technology revolutions are all about.

Give me a moment to wipe the drool off my face as it gets even more interesting (for lack of a better term); the .93mm display is magnetic and simply sticks to a wall mounted magnetic mat. It can even be peeled off when required. The proof-of-concept 55 inch prototype was showcased at an event held in Seoul but is nowhere near ready for mass production as costs of manufacturing this marvel in TV tech are still too high, of course it’s just a matter of time before we see an actual production model. The bigger question is – where, for the love of all things tech, do I connect the cables?! Presumable the magnetic mat is where the various connectors etc would be contained.

LG has been a strong supporter and ardent developer of OLED (organic light emitting diodes) technology and this latest reveal is truly a remarkable advancement into the television technology realm. The level of flexibility (a term only recently being thrown about in TV-tech land) that this new technology emphasizes on could also be tweaked, at some point, to smaller displays making mobile technology just as versatile and captivating.

Just as a side note, OLED’s emit their own light negating requirement of an additional layer regular TVs use for backlighting, hence they’re so much lighter.

While it will certainly do a lot for the overall weight and depth of the devices themselves, I’m quite certain the price tag will balance it out as there’s no way LG will able to keep the price “reasonable” even after mass production begins. We know that existing OLED displays are in no way designed for the faint of heart residing and working in the middle class segment as these are primarily high-end devices designed for the wealthy; but perhaps someday, when the technology moves on, the prices will drop and maybe I can take out a second mortgage for a second hand paper-thin OLED TV.
Source: