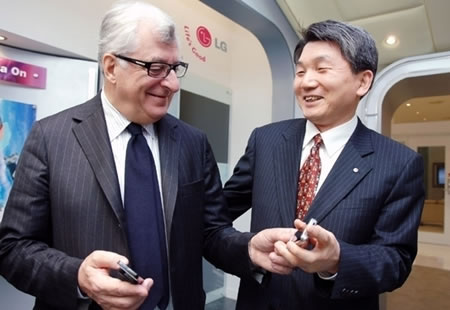 To qualify as iconic, the phones need to play up on breakthrough designs, challenging prior devices with size, shape and style. Utility and mass adoption are just as important cause if people don’t buy them, it’s hard to say they’re relevant. LG Electronics and Prada reveal plans of exclusive partnership to make an iconic cell phone. This first Prada offspring by LG will combine high-end technology with avant-garde design offering the best in both style and performance. The focal point of the phone is that it will have an advanced touch interface which eliminates the conventional keypad.
Pictured above – Mr. Mun-Hwa Park, President & CEO of LG Mobile Communications Company and Mr. Patrizio Bertelli, President & CEO of Prada in LG Digital Park in Pyeongtak, Korea

These distinctive iconic cell phones will get going in early 2007; it’ll first debut in Europe, followed by countries in Asia such as Hong Kong, Taiwan, and Singapore. The Korean version of the phone is scheduled to launch in the second quarter of 2007.
Via – Luxurylaunches