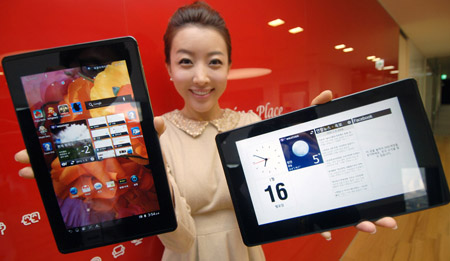 LG has finally stepped on board the LTE bandwagon and has pulled the veil off its rendition of an LTE-capable tablet, the Optimus Pad LTE. The tablet comes with LTE technology and 1280 x 720 True HD IPS display. Complete with an 8 megapixel camera for HD videos, expandable memory up to 32GB, and a Qualcomm 1.5 GHz dual-core processor with Android 3.2 Honeycomb, the Optimus Pad LTE measures in at 245 x 151.4 x 9.34 mm and weighs in at just 497g! With an 8.9 inch display and a 2 megapixel camera on the front, this tablet is bound to take the LTE capable device market by storm.