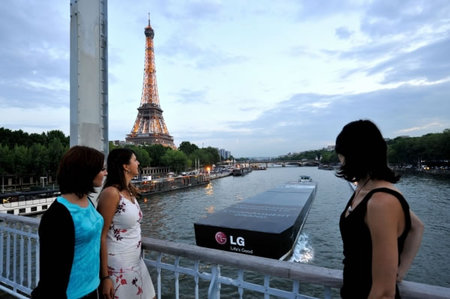 It’s the correct marketing of a product that does wonders for sales. And LG is attempting to woo consumers with its latest energy efficient refrigerator with an out-of-this-world launch. Staying off the terra-firma, the company has designed a 70-meter long container ship disguised as their new refrigerator. Floating on blue waters, this football field sized ship-cum-refrigerator sailed up the Seine from Le Havre to Paris between June 22 and June 25. Though the company boasts that the refrigerator consumes low power, I am not too sure if the worldwide launch of this new LG side-by-side refrigerator was anywhere close to being environment-friendly. Wonder how much fuel was exhausted to sail such a massive ship just for advertising purpose. The well-designed, space-saving 617-liters refrigerator does make less noise due to a LG’s “Linear Compressor” technology. It is stated that this appliance requires 20 percent less energy than conventional refrigerators hence earning A+ class rating in the European Union.

Though European countries like France, Spain, Italy, Sweden, Greece, Hungary, Austria and the United Kingdom can house this refrigerator from July onwards, it will be available in CIS, MEA, and Asia markets later this year.