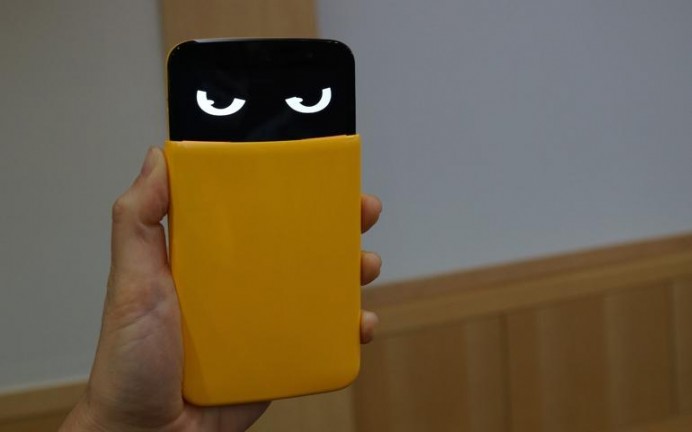 LG AKA comes with expressive eyes and multiple personalities

You have a colouful personality and style, why will your smartphone be just some boring metallic gadget? LG has unveiled LG Aka (pronounced as Aw-kuh) smartphone which has eyes that can move, change colour and give expressions! With expressive eyes, the smartphone also has four different types of personalities; each personality has a background story behind it too! Looks like a lot of fun! The smartphone will come with a case that will cover the lower portion of the smartphone’s display. The top part of LG Aka will have eyes which other than animating can also give notifications and display battery status.

The four personalities are:
Eggy (in yellow colour): is the new Romeo in town, who falls in love easily
Wooky (in white colour): is cute to look at, but don’t go by his looks as he always talks in slang
Soul (in blue colour): is fun loving, loves music and beer
Yoyo (in bright pink colour): is the only style loving female personality, who can’t resist colas and burgers which make her weight to yo-yo.

Apart from the looks and the personalities, LG Aka has not mind blowing but decent specs. The LG Aka smartphone is an android device, has a 5.0 inch screen with a 720p display, quad-core processor clocked at 1.2 GHz, 16 GB of storage, 1 GB RAM, and a 2,610 mAh battery. The idea of bringing a smartphone with its own personality is quite cool, as people might connect to one of the characters. And if you are bored of one character, you can get a different one any time. LG Aka targeted for youth will release only in Korea, the price is 500,000 South Korean Won (about $456 USD). No news on when it will be launched internationally.