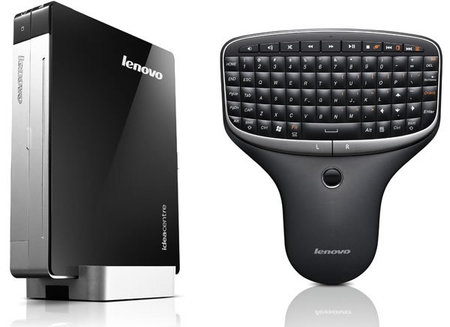 Through most of 2011 we saw a tech giants being obsessed about tablets and smartphones. That trend has not shifted to ultrabooks with as much 50 of these from different brands are expected to showup at CES 2012. Lenovo has jumped in at the right time with its neat little computer called IdeaCentre Q180 Desktop PC. Hailed as the world’s smallest desktop PC, this intends to provide users a small, mobile home theatre solution. Specs include a dual-core Atom processor supported by 4GB of DDR3 memory, choice between a 750GB hard disk drive and 128GB solid state disk for storage.

Besides this, there is an HDMI and 7.1 surround sound output and it also gives you the option to upgrade discrete graphics card like a Radeon HD 6450A 512MB but it might not be capable of running all the latest games. For a price of $349, this one could be thought as a handy home cinema hub with some PC-ness addition.
[Engadget]