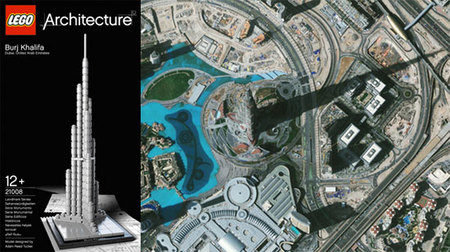 Here is you chance to play architect and build the world’s tallest building, the Burj Khalifa. Lego has released a set of the monstrous skyscraper as part of its Lego Architecture series. The Burj Khalifa has been reproduced by Adam Reed Tucker, who is responsible for the design of all the Lego Architecture sets. No details on the exact dimensions of the finished model are out yet. Hopefully though the model will be one of the taller ones in the architecture series, considering it is of the Burj Khalifa. The Lego Burj Khalifa will be available for purchase form June 1 from the Lego brand retail store, Legoland stores and on-line at shop.lego and online retailers, as well as at the At the Top, Burj Khalifa retail boutique located in The Dubai Mall.
[Dvice]