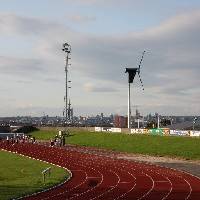 Sure there are many firms now eager to get the greenest and the cleanest form of energy into public use, but rarely has such an initiative lead to a complete opposition from an organization. The South Leeds Stadium is part of the multi-million pound John Charles centre for sport which incorporates the Aquatics centre, indoor athletics facilities and Leeds’ first ever indoor bowls centre. The Rugby League Club of the Leeds sports ground is annoyed that they were neither consulted nor were they notified of the installation of a wind turbine very close to the pitch. They say the wind turbine could ruin the aerodynamics present in the field, and could hamper the outcome of matches in the field. The Rugby Football League and the club are soon to fight for the turbine to be moved, although the LEEDS city council maintains that the turbine is for the benefit of the people and that the turbine could just be switched off when required or during important matches.
Source