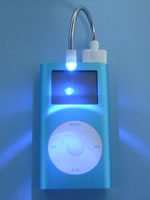 LED light for the iPod

Brightonnet Japan has announced a Mini LED light for the iPod and iPod Photo / Mini third generation and above. The light comes in two colors white and blue. The light plugs in to the ear phone socket and uses power from the iPod. The light can be used even when the iPod is switched off. The LED’s connector arm is quiet flexible and can be bend as per convinience. The power switch is on the connector it’s length is 103mm (3 inches). It will be available in Japan from 16th September and will retail for 1480 Yen ($ 14).