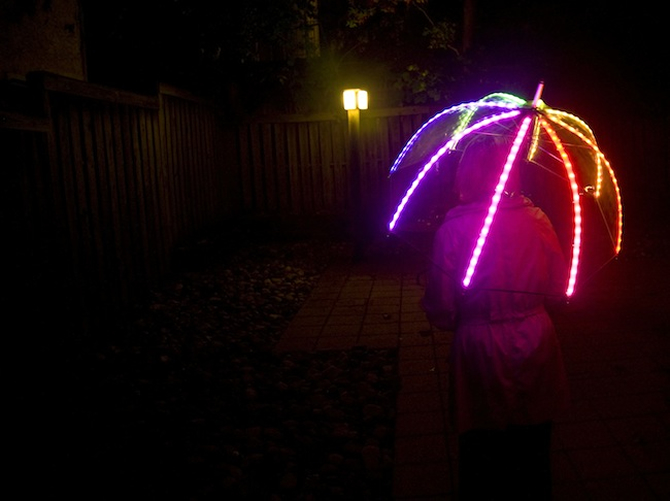 This multi-colored LED flashing umbrella will brighten up rainy days

Umbrellas generally come in dull and boring solid colors, but if you’re looking for something snazzier that’ll brighten up a gloomy rainy day, FLORAbrella might be a great option. The transparent umbrella with LED lighting strips was designed by Leslie Birch and it took the first place in an international wearable technology competition held by engineering community Element14 and manufacturer Adafruit. Leslie Birch, a videographer by trade, took two and a half month to complete the project. She first learned about Arduino microcontrollers through The Hacktory, and made her first foray into hackathons at the Lady Hacks last March.

The LED strips on the transparent umbrella shell looks pretty cool and can change colors and patterns on a click of a button. It might not be as cool, but it somehow reminds me of the amazing LED outfits in the Step Up 3 movie. Birch also built an LED-equipped skirt that follows the orbit of the International Space Station for NASA’s Space Apps hackathon in April.