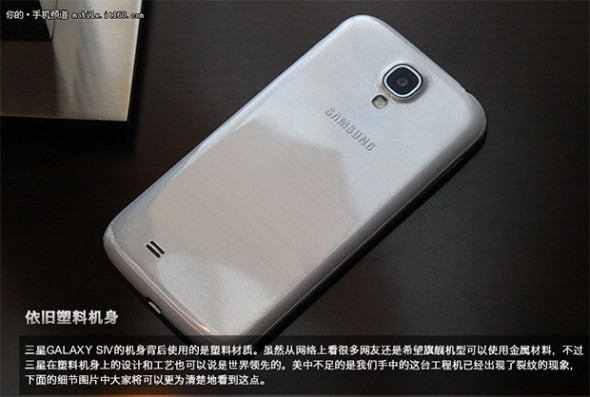 The Samsung Galaxy S IV GT-I9502 has been a long time coming and as we near the launch we see more leaks coming up. These, however, come from a Chinese website and are quite clear. This batch of images is among the most believable lot. With looks borrowed from the Galaxy Note II the phone also adds a touch of texture to the generic Galaxy S line. It is said to arrive in China in its dual-SIM avatar with Android 4.2, powered by a Exynos 5410 1.8GHz Octa-core processor, PowerVR SGX 544MP3 graphics, 2GB RAM, 16GB internal memory, 2600mAh battery, Smart Scroll and Smart Pause and Air View that effectively substitutes the S Pen with your fingers. We can also hope for an exciting camera in this one.


There are several images to look at and savor before the real deal is unveiled.