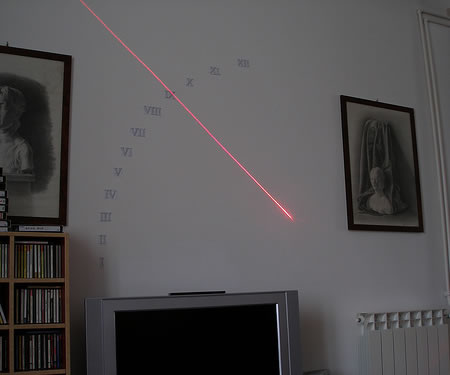 Laserdial a clock straight from the Jedi Temple

Alessandro has created this XXI Century Sundial using a Arduino microcontroller, a wall, and a laser. It looks something Master Yoda would use to tell the time.
This is a simple project of a sundial wherein the pinion is replaced by a line LASER I took from a LASER level. The LASER is mounted on a RC servo which in turn is driven by a micro controller. The micro controller keeps the time and turns the RC servo accordingly. … Shorting pins 1-2 adds some life to the sundial and makes it count just the seconds. Hypnotic initially, then pointless.
[Make via BBG]