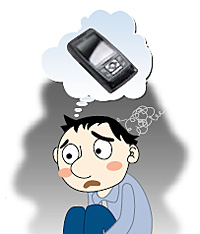 After battling Internet addiction now it seems it’s time to weed out cell phone addiction among the youth. Korea is believed to be the first country in the world to conduct a program to help cure mobile phone addiction .A civic group called School Beautiful Movement, together with the Korea Agency for Digital Opportunity and Promotion and SK Telecom, has launched a campaign to teach the youth proper cell phone use. They hope that the program will help prevent mobile phone addiction through research and education, and that students will willingly learn to properly manage their cell phone. For the pilot program 12 elementary, middle and high schools were selected. They were to discuss over the next two months the symptoms they experienced when they are without a mobile phone, and consider proper use of the phones as consumers. The schools will have cell phone lockers, where students voluntarily put their phones preventing their use during class time. Addicts claim nervousness and do not know what to do with her empty hands.

Hopefully this endeavor will bear fruits and save the youth from addictions that manifests itself in various forms. Be it smoking, drugs, alcohol, sex or gizmos and gadgets.