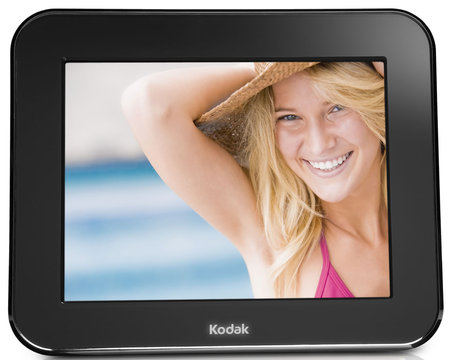 Kodak today announced the next generation of its award-winning Kodak Pulse Digital Frame.The popular wireless frame with its own email address now has an extra shot of social – allowing you to comment on the pictures you receive from friends and family the moment you receive them. A Quick Comment button on the touchscreen lets you communicate back to the picture sender directly from the frame and includes options like Such a KODAK MOMENT, LOL!, OMG!, Congrats! and Wish I were there! The Kodak PULSE Frame also connects to FACEBOOK and KODAK Gallery albums so pictures are streamed to your frame automatically. Kodak Pulse Digital Frame stores up to 4000 pictures with 512 MB of internal memory.

In addition, you can now create playlists to choose the pictures you want to see the most. Available in 7-inch and 10-inch sizes, the Kodak Pulse Digital Frame also has a new built-in activity sensor that turns the frame on when you’re nearby and conserves power when you’re not. The Kodak Pulse Digital Frame with Full touchscreen in 7-inch or 10-inch high-quality display featuring Kodak Color Science and LED backlighting will be available for approximately $129.95 and $199.95 respectively in spring 2011.