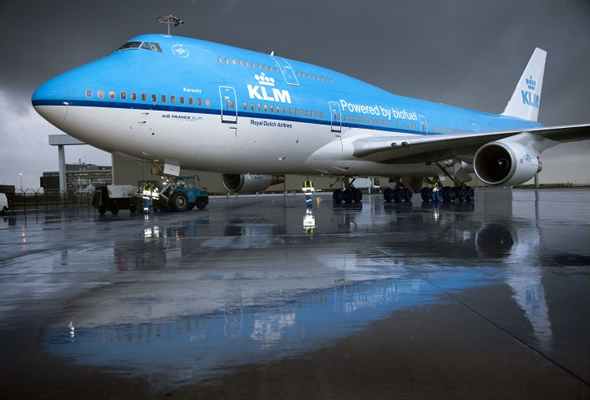 Biofuel has made it to the skies before, but we’ve not heard the likes of cooking oil inspiring wings to take flight. The KLM Royal Dutch Airlines has announced the commencement of weekly flights from the John F. Kennedy Airport to Schiphol that will run on sustainable biofuels. This has been enabled by an endeavor between KLM Royal Dutch Airlines, Delta Air Lines, the Port Authority of New York and New Jersey, and KLM’s partners in the Corporate BioFuel Program. The JFK-bound flights started plying from March 8th itself. It’s said that the biofuel used there was derived from cooking oil. The airline company already has a strong repute of leveraging sustainable biofuels to enable eco-friendly flying. Back in June 2012, KLM conducted its longest biofueled flight ever from Amsterdam to Rio de Janeiro.


“I am proud that KLM is once again demonstrating its leading role in developing sustainable biofuel,” said KLM managing director Camiel Eurings. ”For eight years in a row, KLM, together with Air France, has been sector leader on the Dow Jones Sustainability Index. Alongside this biofuel series we are starting a study to further identify sustainability gains in fuel, weight and CO2 reduction throughout the entire flight process. We are striving to achieve the ‘optimal flight’ together with research institutes, suppliers, airports, and air traffic control. We are combining new and existing technology, processes, and efficiency initiatives to achieve this. Cooperation is a priority! . . . By this initiative KLM demonstrates that sustainable biofuel in the airline industry is here to stay.” This move also received praise from Henk Kamp, the minister for Economic Affairs. He was quoted saying: “This new steps shows that KLM is a frontrunner in making air transportation more sustainable. Initiatives like these are essential in making our economy more sustainable and create new business opportunities for Dutch companies.”