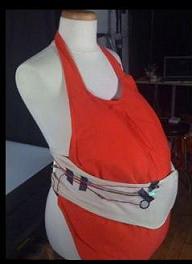 The marvel of birth brings about the most bizarre of parental instincts; one of the strongest is that of protection and the other is instinctive communication. Corey Menscher, wanted to feel his child’s every movement as it navigates itself in its mother’s womb. So much so, that he created Kickbee, a unique contraption to let the unborn child twitter its every movement online.

The Kickbee uses sensors are piezos held in place with an elastic band. They are connected to an Arduino Mini, which connects to a host computer using a BlueSMIRF Bluetooth module. The host Mac does the logging and twittering.
Via