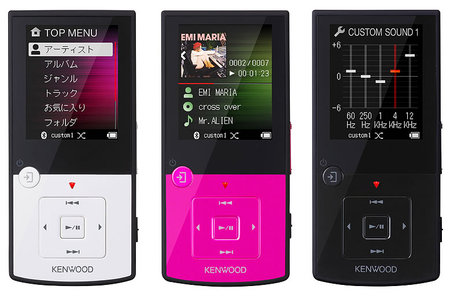 Kenwood isn’t doing a roaring business in the digital audio player segment in US and Europe but its Media Keg series surely had a respectable presence in Japan. After a long hiatus, we finally see the company refreshing its Media Keg DAP lineup with the MG-G608 series. The 8GB device comes with microSDHC Card slot, Bluetooth 22.0 capabilities, 2” Color TFT Screen, a 19h battery life and supports a host of audio files including MP3, WMA, AAC and WAV. As of now this one’s only for the Japanese market but presence of both English and Japanese UI tells us that this could cross borders soon. It measures 46.5×98.5×13.5mm and weighs just about 55 grams. It will hit retail stores somewhere around mid June for a price tag of US$184.
[Impress]