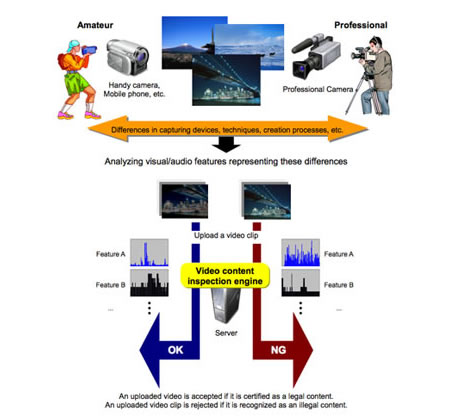 Japanese company KDDI R&D Labs have developed a new content protection technology that can detect pirated video content by distinguishing content created by a professional and an amateur. Up till now pirated content was weeded out by human inspection but with this software the content will be analyzed in terms of their video capturing devices, their techniques, their video creation processes etc. Illegal video clips can be found easily using this new technology and as the technology analyzes features of the content itself, there is no need to register pirated video in the database and its effective for new video clips that have never been uploaded before. The system can be includes as a “video content inspection engine’, which can be installed on video sharing servers. Essentially all videos uploaded will be scanned as per the parameters and only the ones that pass the litmus will be accepted and the pirated- rejected.

KDDI feels that this new technology is more effective than the ‘fingerprint’ technique being tested by sites like YouTube. The company also claims a 98% success rate.
Press release
Saitama, Japan – October 29, 2007 – KDDI R&D LABS today announced that it has developed a new content protection technology which enables pirated video content detection by distinguishing between the content created by a professional and the content created by an amateur. This technology has been developed in consideration of the situation that while the number of users on video-sharing sites such as YouTube™ is increasing rapidly, copyrighted video clips have been illegally uploaded, e.g. TV programs. Up to now, in order to find pirated video clips on video-sharing sites, a human has to check by visual inspection. Then if pirated videos are found on the sites, copyright holders need to request the video-sharing site operators to delete them, which requires so much labor. Recently some video-sharing site operators implement a pirated video blocker based on fingerprint, which is a set of features for identifying video content. In fingerprinting technology, however, copyright holders have to identify copyrighted videos and provide operators with the copyrighted videos and the necessary information, while video- sharing site operators have to register fingerprints of the copyrighted videos in advance.
Moreover, it is very hard to keep following explosively increasing video clips which are newly uploaded day after day. KDDI R&D LABS’ technology focuses on differences between a professional and an amateur in terms of their video capturing devices, their video capturing techniques, their video creation processes, and so on. With KDDI R&D LABS’ proprietary technology, visual and audio features which are affected by these differences are analyzed, and then it enables to distinguish between video content created by a professional and video content created by an amateur; a very high distinction rate of 98% is achieved. Using this technology, illegal video clips can be automatically and reliably found on the vast amount of video content, which significantly reduces labor costs for eliminating pirated videos. In addition, since KDDI R&D LABS’ technology analyzes features of the content itself, there is no need to register pirated videos in the database beforehand, and furthermore, it is effective for new video clips which have never been uploaded so far. This technology can be implemented as a video content inspection engine, which is installable on video sharing servers. Upon being uploaded, a video clip will be inspected and if it is suspected as a pirated video clip, it will be rejected. This protects copyrights of video content.
Source