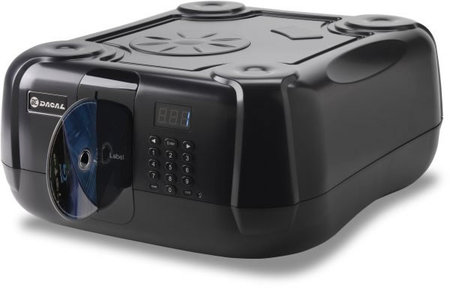 True to its word, Kaleidescape, the creator of the movie server product category, announced the launch of the industry’s first Blu-ray movie server. The Kaleidescape System stores exact copies of your Blu-ray Discs on its hard drives, and transforms your collection of movies into a magical experience. The 100-disc Blu-ray disc vault, when paired with its M300 or M500 players, can rip, store, and stream copies of Blu-ray movies throughout the home. However, it does come with some serious restrictions — each disc vault has to be connected to an individual player, and the discs have to remain in the vault for the player to stream their ripped copies over the network.

A key aspect of the Kaleidescape Movie Guide is the unparalleled movie-watching experience it offers. With high resolution cover art combined with a brief synopsis of each film and other details make it entertaining to explore your collection of movies. Video bookmarks and triggers enable the system to start a movie instantly and automatically adjust lighting, curtains and screen masking during playback. With over 145,000 titles, Kaleidescape’s exclusive Movie Guide is the largest database of its kind.
The Modular Disc Vault is priced at $1,495 MSRP. The M500 Player and M300 Player (shipping since May 2010) are priced at $3,995 and $2,495 MSRP, respectively, in the United States and Canada. Any Kaleidescape System can be upgraded to be a Blu-ray movie server with the addition of an M-Class player and a Modular Disc Vault.
[Engadget]