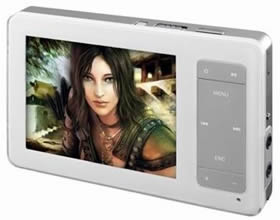 The Chinese folks at JXD have managed to come back on the showbiz, this time with their JXD638. The new PMP is high on features with state-of-the-art design cues. the 1GB JXD638 sports a 3.0-inch display, two megapixel camera, video in as well as video out, some manner of videogame functionality, an SD slot, and goodies such as calendar, calculator, and electronic dictionary. In the file-support department we’ve DivX, XviD, ASF on the video tip, MP3, WMA, and WAV for music, and JPEG too. One thing that sets the player apart from the crowd is the presence of a photo camera into the 100.2 x 63.2 x 12.2mm (98 grams) bodywork as well.

Well there are a couple of downsides too (every coin has two sides…). The on-board memory is expandable only up to 2 GB obviously through SD cards and battery life is sad ( 1100mAH lithium battery delivers 4 hours of playback time for video, but only 5 hours for music). Lacks Ogg/FLAC support and doesn’t seem to be intent on crossing the Chinese borders. It is priced at 150 Euro i.e. USD $196.
Source