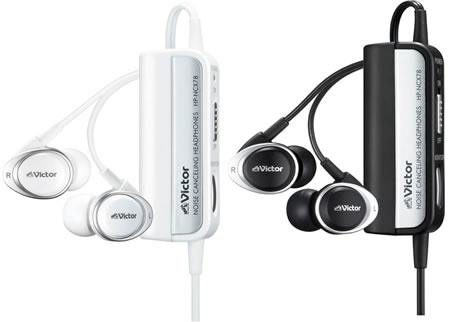 JVC Japan has announced HP-NCX78 ear canal earphones which feature newly developed multiple noise canceling systems. The new noise canceling circuit reduces noise by almost 1/8 and further reduces white noise by the circuit generated by the new design. Apart from this it is the usual what you would expect from a NC earphones – A unit which houses the battery,noise canceling circuit, microphone and toggle switch. The earphones deliver an output of 18Hz – 22kHz and impedance of 36Ω (NC On) /14Ω (NC Off). To be made available in black and white the JVC HP-NCX78 will be go on sale in Japan by mid-Feb for 8000 Yen ($ 90).
[JVC Japan]