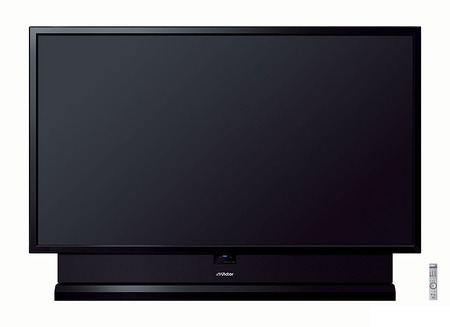 JVC Japan has announced the HD-110MH80 which gets the title of the world’s largest rear projection TV. At 110 inches it is the biggest TV money can buy as its Plasma and LCD counterparts from Mitsubishi and Sharp max out at 103 and 108 inches respectively. It adopts the Bick screen (Exe series) which offers full HD resolution at 1980 x 1020 pixels. Powering this mammoth is the TS-CL110J high tension mercury lamp which costs around 15,750 Yen ($ 130) to replace. Onboard 14 bit digital image processing and the Genesas image engine deliver superior picture quality, it has onboard digital and analog tuners. The speakers deliver an output of 10W x 2 ch, onboard connections include 2 x HDMI, Ethernet and Monitor input.