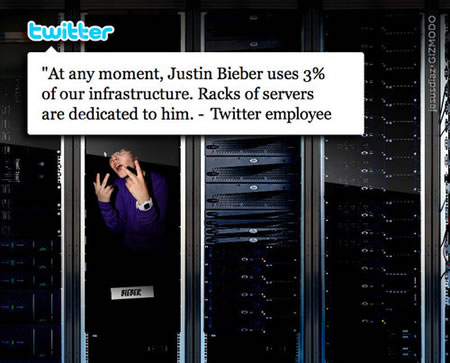 Justin Bieber has Twitter servers dedicated to his service!

Just when I thought that people were beginning to get used to the existence of Justin Bieber, there’s suddenly a new clip of news that I would totally not believe had it not come from the horse’s mouth itself. Twitter happens to be shedding quite a bit of their infrastructure to serve the requirements of the singer. One Twitter employee revealed that JB uses 3% of the company’s infra at any given moment. That’s one thing. What’s really threatening is that the company has ‘racks of servers dedicated’ to him.

What’s more is that it isn’t just Justin but also other celebs who manage to attract so much attention and mention on Twitter. If you are another anti-JB bloke you’d be clutching the arms of your chair now.
[Gizmodo]