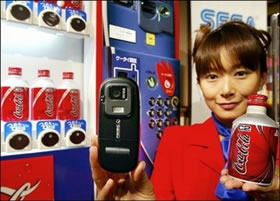 Japanese love their vending machines and with one vending machine per 23 people Japan has world’s highest vending machine densities. Another popular trend is contact less payment services which work using the mobile phones. Soft drink giant Coca Cola has decided to merge these technologies and equip its vending machines in Japan to accept credit payment through mobile telephones. Its machines will start accepting iD, a contactless credit service on mobile phones developed by NTT DoCoMo and Sumitomo Mitsui Card Co, on October 31. Coca-Cola Japan runs 980,000 machines in the country and aims to have 10,000 to accept contact less payments by year end and around 200,000 by the end of 2008.

This system is less expensive than traditional coins and bill based system.