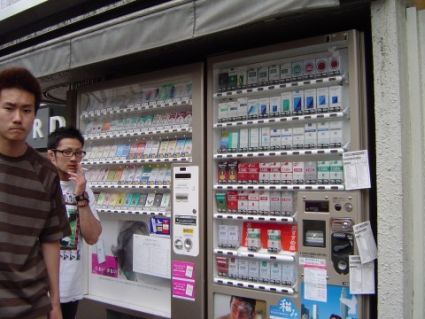 Age is such a fluid concept when we are young, like going to an ice-cream parlor and getting a free lolly just for looking cute. Then when older you go to a store and the once kind hearted ice-cream guy looks at you like you don’t exist. We end up buying our first pack of cigarette for the misery of not getting a free lolly anymore. (Life is mean) Well Japan is gearing up to turn vending machines into mean sellers who look for visual cues rather than fake ID’s to hand out cigarettes a ignore the under aged buyers. Obviously since its Japan gadgetry has to be involved. A company has developed a system to identify age by studying facial features.

By having the customer look into a digital camera attached to the machine, Fujitaka Co’s system will compare facial characteristics, such as wrinkles surrounding the eyes, bone structure and skin sags, to the facial data of over 100,000 people. Lets hope that these underage smokers get repulsed at those machines and go back to eating an ice lolly.
Source