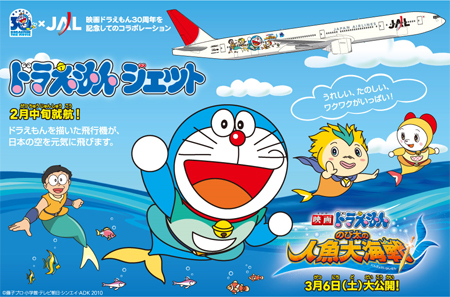 We know the Japanese love their manga and anime. They’re all about that stuff so much so that in a recent attempt to uplift themselves from a serious decline in profits and funds, Japan Airlines has announced that a Boeing 777-300 jet will be making more on domestic routes in the country. Now that’s not news at all, but the thing is, this jet is going to be customized and adorned with paintings of that famous ‘robot cat’ Doraemon. This is more like a promotional stunt for the creators of the cartoon character foe his (or hers, I’m never sure) to publicize the new movie – Doraemon The Movie: Nobita’s Great Battle of the Mermaid King (a.k.a. Doraemon The Legend), which will hit theaters on March 6.

It doesn’t just end with airline’s colorful jet as JAL will also be offering Doraemon-themed tours to Okinawa starting February 15 through April 30 with daily departures from Tokyo, Osaka, Nagoya, Fukuoka and Kitakyushu. There will also The carrier will also be a selection of Doraemon entertainment on domestic and international flights, as well as a Doraemon kids’ corner at airports and limited-edition Doraemon goods through their in-flight catalog, so by the end of the journey you’ll either love the character more be so sick of it you’d never fly again.
Pinktentacle