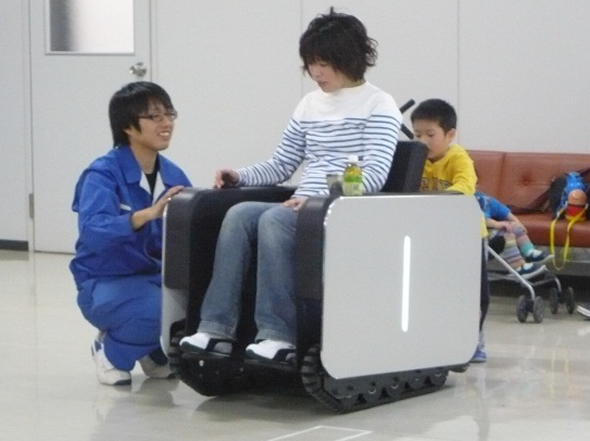 Most of the Wheelchairs that double up as electric vehicles (EV) are utilitarian in nature without much styling features. Nano-Optonics Energy, a Japan based company, has come up with a one-seater electric vehicle (EV) called “Unimo” that looks like a sofa and has most of its mechanical bits hidden behind its flat panels. The EV has rubber crawler tracks instead of wheels, which gives it extremely agility. It can make a 360° turn in a tight spot. It is equipped with a torsion bar suspension (independent suspension) that gives it the ability to climb a step as high as 15cm. It is easy to manoeuvre the EV on rutted roads, gravelled surface and sandy tracks.


It even has a function that assists the user to get on and off the vehicle by tilting the rear end of the seat by 30°. The EV can be controlled by a joystick as used in similar wheelchairs which makes it easier for its users. The company plans to sell the EV’s only to hospitals and clinics, and hasn’t revealed the price.

Specs of the EV are:

Motor: two brushless DC motors whose output is 400W each