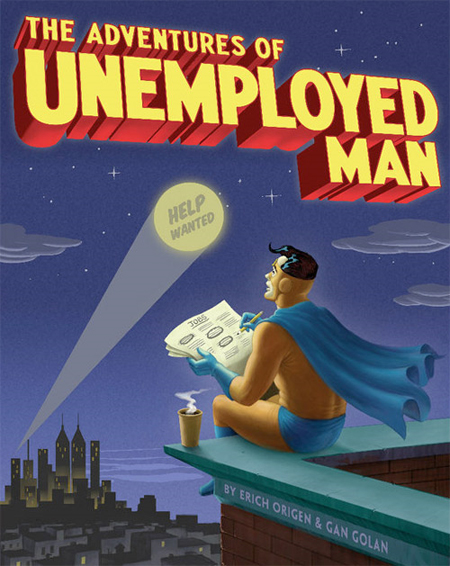 It’s a bird, it’s a plane, no it’s an economic crisis and it looks like a job for Unemployed Man

Who doesn’t love a good parody of all that is usually good and right with comic book or movie worlds? Even if they mock some our favorite characters the concepts should be taken with a grain a salt and dealt with in the manner they so deserve which means sitting down, taking off your trousers, sipping on a cold beer and laughing your guts out. The adventures of Unemployed Man, featuring artwork by such comics legends as Ramona Fradon, Michael Netzer, Benton Jew, Thomas Yeates, Thomas Mauer and Lee Loughridge amongst quite a few others, is the story of a caped crusader and his diligent sidekick Plan B. Just the names make me laugh. These two ‘heroes’ are in a constant battle against the evil and villainous… um… villains, who’s headquarters is names Hall of Just Us. The geniuses behind this ‘economic’ Superhero are Erich Origen and Gan Golan who were responsible for New York Times bestseller Goodnight Bush. 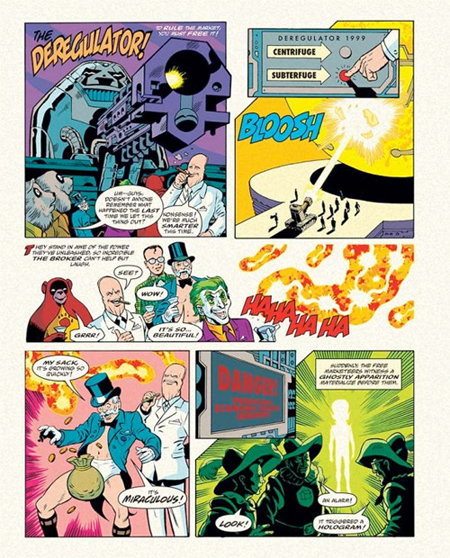 It gets even better; here are some of the names of these villains – The Human Resource, Toxic Debt Blob, Pink Slip and The Invisible Hand. This parody takes into account issues of the days economic crises and lightens the mode with some serious comic book humor. A whole league of ‘off beat’ economic crises super heroes sprung up and you know I have to tell you the names again – Master Of Degrees, fix-it-with-tape Ducto, pain-shrinking therapist Good Grief, checkbook unbalancer Zilch, shadow worker Fantasma, and Wonder Mother. Get this, Winder Mother is said to have built her famous invisible jet from pieces of the glass ceiling. ROFL! ROFL! ROFL!
Nerdcore