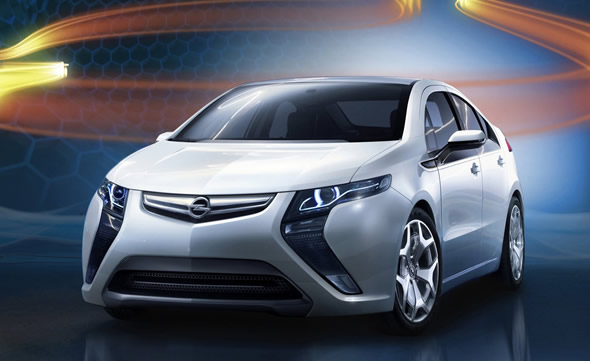 Imagine driving 280 kilometers on a single gallon of petrol. This is the promise of the plug-in hybrid, Opel Ampera, arguably the first electric vehicle of its kind sold in Europe. Built on the famed Chevrolet Volt base model, the Ampera is an electric-petrol hybrid. The car runs on a conventional combustion engine, but utilizes electricity for the first 40 to 80 kilometers. Once the battery runs low, the petrol engine kicks in and can power the car up to 500 kilometers without refuelling. Truly, this is a car made for the 21st century.


In terms of design, the Opel Ampera seems straight out of a science fiction movie. The front grille is bold and futuristic, and for a compact car, the Ampera seems remarkably wide and spacious. The rear end continues the same futuristic design concept with sleek tail lights and a clean, stylish boot. The interiors are similarly detailed, with ample storage space, luxurious seating and a ton of technological features such as touchscreen controls, Bluetooth connectivity, etc.

What really sets the Ampera apart is the ‘brains’ or the engine beneath the bonnet. The Ampera is difficult to define – it is an ‘electric-petrol’ hybrid that combines two different driving systems. The car runs on electricity for the first 40 to 80 kilometers (or until the charge runs out), which is good enough for everyday city driving. Once the battery runs out, the petrol engine kicks in and it is possible to push the car to 500 kilometers without stopping for fuel.

The Ampera boasts state-of-the-art regenerative braking technology. That is, the car’s electric battery automatically recharges every time you press the brakes. Thus, you can switch to electric power while you’re driving on petrol because of the efficient and innovative recharging through braking.

The electric motor boasts 148hp of power and can recharge fully in under 6 hours. Besides this, there are two more motors – one, a 71bhp electric generator, and a 1.4 litre, 85bhp conventional petrol engine. When driving on the petrol engine, the car can draw power from the electric motors as well, which improves power and efficiency. No other car in the world can boast of such an ability. Because of the combined electric-petrol engines, Ampera drivers will never have to worry about the car’s range. Further, since the electric motor will take care of most everyday driving needs, your fuel costs will be remarkably low.

The Opel Ampera is a revolutionary car. It is easy to see why it won the Car of the Year award in 2012. It is the car for the future – low on emissions, efficient, powerful, clean and affordable.