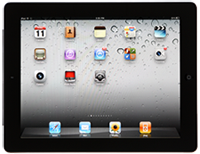 Is the Retina Display coming to the iPad 3?

There’s no telling what we could expect from the iPad 2 when the first few mentions of it were out. Now the iPad 3 has some dope making rounds and we’re eager to trip on the same. Whatever happened to the tech blogs after the launch of the iPad? They barely chased the awesomeness of the next big release from Apple. The iPad 3, it seems, will be taking the world by awestruck wonder as it will have Retina Display, according to a source. This amounts to resolutions of up to 2,048 x 1,536 pixels. There’s also word that the tablet will be coming along by September this year now how much of this should we buy?

A tipster for TechUnwrapped seems to have gotten his eyes on some high resolution images that vouch for these claims. We now need to wait for more iPad 3 news.
Cnet