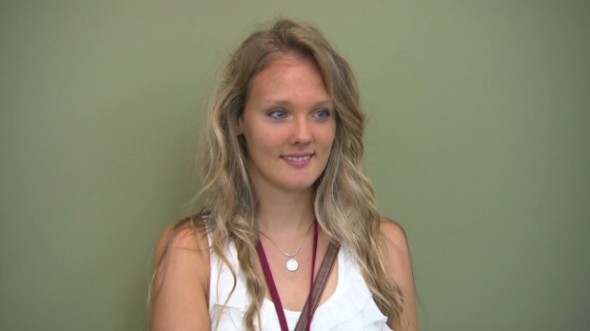 The latest in ID checks for schools isn’t some futuristic ID card implanted with data or some sort of new fangled smartphone app or other such nonsense. Winthrop University in South Carolina is testing good old, CIA, FBI style Iris scanning to work as fool proof ID cards for students. During their freshman orientation in the summer, students would get their eyes scanned when they received their traditional ‘old-school’ ID cards. A company called Iris ID from New Jersey will be implementing this form of ‘Hands-free’ checking. Another company from South Dakota makes iris scanners for school buses that kids uses before boarding. The information will either tell the children if they’re boarding the right bus or the wrong one. This scanner called Blinkspot works in conjunction with a smartphone app that a parent could use to ensure their child’s whereabouts. Details like if the child has boarded or exited the bus, their location on Google Maps, the date time and even a photo of the child will be emailed to the app.


Word is that this form of biometric security could be the next wave in security features and would eventually make it to all kinds of terminals including airports, banks, bus depots etc. Banks could use iris scanning at ATMs instead of pins and so on. Companies like Eyelock are already readying their tech for banks and air terminals and are also working on school ID formats. Their system, it’s said, can process almost 50 people in one minute. Naturally it seems a little Big Brother-ish as this would mean the government could use this to keep track for everything you do without being intrusive, and that’s not necessarily a good thing. So privacy laws are in question.

The various companies working on developing this technology claim that data captured is encrypted in some form of Binary code (1’s and 0’s) and that the various institutions that install the tech own the data. It’s only a matter of time before the tech is installed in most places and whether or not it will be accepted gracefully is also a big question.