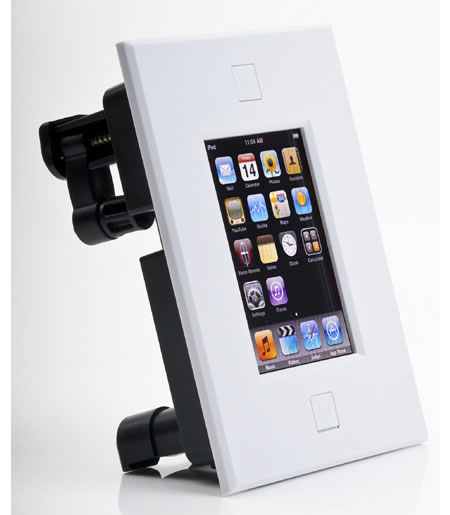 It seems that Apple’s oh-so handy iPod, iPod Touch and iPad are increasingly encroaching on our daily lives and now, thanks to the iPort, into our homes. I must admit that Apple’s increasing world domination is starting to scare me. Raise your hand if you do not own at least one of Apple’s “i” range. Exactly. Well, with the iPort, you could realistically have one in every room. Not content with pioneering wall docking systems for the iPod, iPort is now planning to launch the Control Mount Series for the iPod touch and iPad, later this month. The product is basically a wall-mountable frame. It has a magnetic fascia that holds your “i”-whatever in place, so you can use it as a touchscreen, and control anything from your music to the room temperature, according to the apps you have stored.

Priced at $250 for the CM100 and $499 for the CM2000, I can’t help thinking that I could make something similar myself, with a hammer and nails, for a fraction of the price.
[Electronichouse]