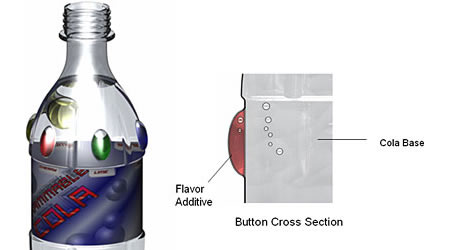 This is something Steven Speilberg forgot to include in the Back to the Future series a soft drink bottle with flavour buttons could give customers multiple beverage choices in one container. The programmable bottle is not some wild concept it is very much real and is the brainchild of Ipifini a company in Mass. When it comes to improving soft drinks, food manufacturers appeal to broad tastes. Consider Coca-Cola, now available in half a dozen flavors, including Coca-Cola Black Cherry Vanilla, Vanilla Coke, Coca-Cola with Lime, Coca-Cola with Lemon and Raspberry Coke. Building and operating several factory lines to accommodate each flavor is more expensive than using just one and on top of this distributing the products is also a challenge. But the programmable bottle would require just one factory line to dispense the base flavor, such as cola. Several different flavors would be locked in sealed, plastic buttons around the periphery of the bottleneck.