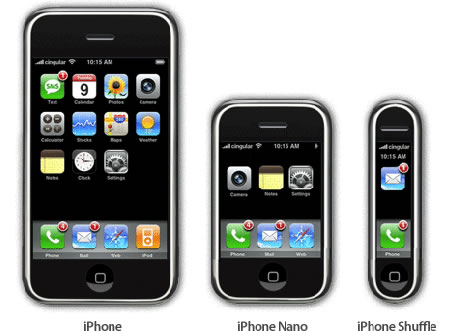 iPhone Lite cheaper versions of the phone on the cards?

Rumors are abuzz that Apple is working on cheaper variants of the upcoming iPhone. Just like the iPod Shuffle and iPod nano players were launched after the regular iPod to meet the demand of the people who wanted a cheaper solution. Technology research analyst Shaw Wu says “Apple needs to round out its iPhone product line at lower price points (similar to iPod) if it expects to replicate the success of its iPod with sales of 100 million units.” Wu added that he has also received news of: “lower cost iPhone prototypes for release at unspecified future dates” from his sources in the market.

He further said about the appeal of the Apple iPhone: “We believe one overlooked advantage iPhone may have over other smartphones is that when making calls, its virtual dialer has no extra clutter, and it is likely easier to dial unprogrammed phone numbers than on fixed QWERTY keyboards.”