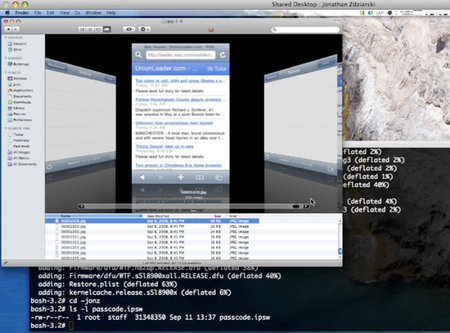 According to a renowned hacker and forensics expert, the iPhone has a flaw that up to now only been used by data miners. However if this flaw is patched up then it could make the job of investigating officers a little more tedious. The flaw is in the iPhone’s pass code lock which according to a guy called Jonathn Zdziarski, once hacked could provide with actual screen shots of everything the user has done on his/her iPhone. When an iPhone user taps the Home button, the window of the application you have open shrinks and disappears. In order to create that shrinking effect, the iPhone snaps a screenshot. Therefore, this makes it rather easy to gather evidence against criminals convicted of rape, murder, or drug deals.

Although according to design the phone does delete the images, but then data mining experts know that a file once deleted does not actually go anywhere. It takes around 60 seconds to break the iPhone code and can show you everything the user has been doing like snapshots of the sms sent/received, images viewed, websites visited, and the likes.
Source