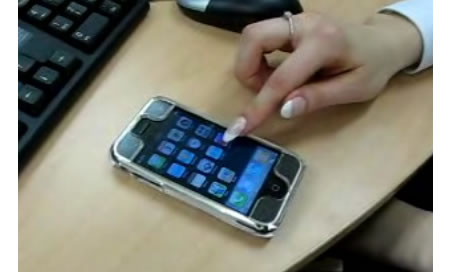 iPhone doesn’t support vanity, pudgy fingers are an issue too

Vanity doesn’t seem to be there in the dictionary of the iPhone, no wonder women with manicured nails are having a problem using the touchscreen interface. Another glaring issue is that people with fat fingers are unable to navigate the phone efficiently. At the brink of introducing the vastly improved 3G version for only $199, starting July 11; Apple sure has a unique issue at its hands. Apple also announced that it would give all iPhone owners a new software upgrade with improved functionality. The new 3G phone looks very hunky with GPS, a faster network, a simulated method for running multiple programs, lower cost, and more. Although some people are upset about the lack of video, lack of memory expansion, such as miniSD cards and lack of copy and paste for text, women are complaining that it won’t respond to fingernails!

Erica Watson-Currie of Newport Beach, Calif., a consultant and lecturer, is among the women up in arms that the iPhone won’t respond to their long fingernails. She states, “Considering ergonomics and user studies indicating men and women use their fingers and nails differently, why does Apple persist in this misogyny?”
However nail or not, iPhone sales among women and in general are up. Since June 2007, Apple has sold 6 million iPhones. Earlier only one in four iPhones bought was by a woman; that number has now jumped to one in three, according to Nielsen Mobile.
Source