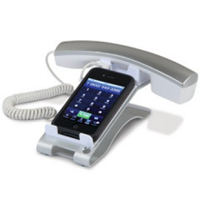 iPhone Desktop Handset for those who hate mobile phones

My 103-year old Gran surely hates the idea of people taking phones and roaming the streets Stateside since they believe that it dilutes the purpose of a walk and then you face the chance of disconnections owing to network loss (‘Aye kid? What bees that?’) So if you’re in the same soup but at the same time do not wish to compromise on a communication touch point by not gifting your favorite Gran an iDevice then resort to the iPhone Desktop Handset kit. It looks and feels just like a good old landline phone. There’s the coiled wire and all that gives the dock a really retro, yet sleek look. You can access all applications and feature and even charge your phone.

$60 is all it costs you to make sure that your iPhone gift is pinned down for those who just don’t see the point in phones moving around. Though, there are very few with that idea and notion.
Zedomax