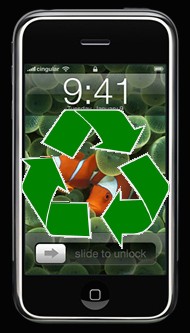 In response to a Greenpeace report published recently, Apple says that their iPhone complies with the restrictions placed on hazardous substances. “Like all Apple products worldwide, iPhone complies with RoHS [Restriction of Hazardous Substances], the world’s toughest restrictions on toxic substances in electronics,” an Apple spokesperson, told Macworld. “As we have said, Apple will voluntarily eliminate the use of PVC and BFRs by the end of 2008.” According to tests commissioned by Greenpeace, chemicals that included “phthalates” were found in the vinyl plastic earphone wiring at levels that are prohibited in young children’s toys in San Francisco and the European Union (EU). The tests also found brominated compounds in half the samples, which can create dioxin when burned, according to the study. Based on these findings, the Center for Environmental Health has given Apple 60-days legal notice (a step required by California law) before a lawsuit is launched. The Center for Environmental Health is hoping to “encourage the manufacturers through a negotiated settlement to reduce the use of these chemicals.”

Apple CEO Steve Jobs had clarified the company’s stand on the issues concerning the environment in an open letter earlier this year. In the letter Jobs said that Apple plans to completely eliminate the use of PVC and BFRs in its products by the end of 2008. He also outlined plans to eliminate or reduce the use of other chemicals including Arsenic and Mercury.
Source