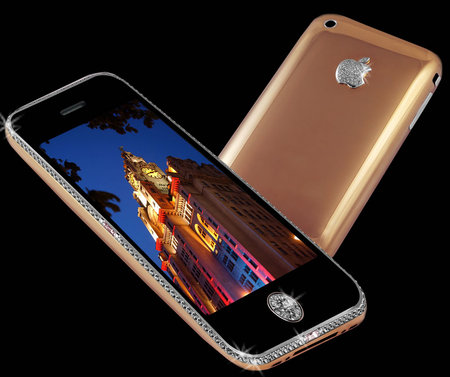 Sky is the limit for folks who push their own limits. Such is the case of Stuart Hughes. Just about two months back, he unveiled the Apple iPhone 3GS Supreme. Tagged at £1.92 million, this bejeweled cell phone was honored as the world’s most expensive cell phone then. However today his latest creation the iPhone 3GS Supreme Rose has bagged the crown of the world’s most expensive cell phone. Priced at £1.93.25 million, this rosy version flaunts a rare 7.5ct single cut diamond for navigation. Boasting of an unusual combination of platinum and rose gold, it is caked with 130 diamonds that total up to 97.5 ct on the front. A rose gold Apple logo studded with 53 diamonds sits on the rear side. I’m sure the four pink baguette diamonds (on the front) that total up to 10 cts has added on to its price tag. Here again I think, it is aimed at the fairer sex considering the pink dazzling diamonds. So ladies, if the Nokia Supreme didn’t live up to your taste, then you’ve got another option to splurge on!
Via – [Luxurylaunches]