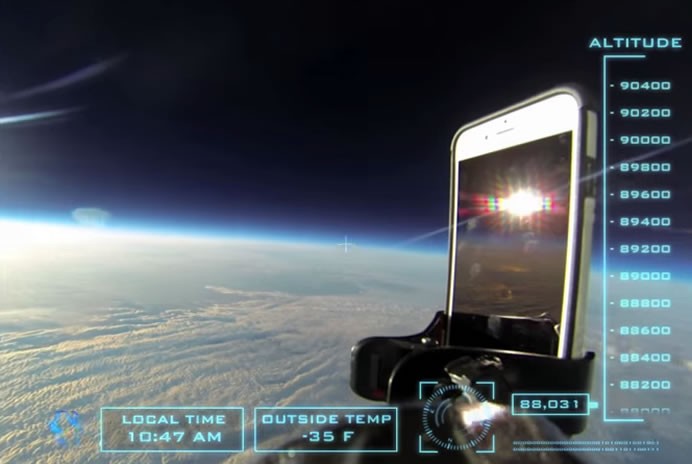 What would happen to an iPhone if it were dropped from space? It’s a question that’s just been on everyone’s mind since the phone was first introduced. Well I could be wrong about that, but these days doing ridiculous things with smartphones to test their reliance to extremes and their endurance to survive all kinds of cockeyed conditions is getting a little mundane. So when a California-based company named Urban Armor Gear decided to send an iPhone 6 to the edge of space and then let it fall just to test the strength of their case, I wasn’t altogether astonished. However, the results of the test really did a number on me.

So here’s what they did, they strapped an iPhone 6 to a contraption which they attached to a weather balloon to carry the unsuspecting device to the outer reaches of our planet. Monitoring the progress of this iPhone escapade were two carefully mounted GoPro cameras and a GPS locator. Thankfully the handset was also attached to a parachute to help regulate its decent. I’d hate to have seen the outcome were it not. At around 100,000ft the iPhone 6 made its fateful fall and here’s what happened –

According to the results, the handset survived the rigors of ‘almost space’ even though it did shut down in those -56C temperatures. However, it was rebooted successfully after its crash landing. The rig it was attached to was smashed on impact, but the iPhone 6 survived. Excuse me while I lift my jaw off the floor …

UAG co-founder Steve Armstrong made a statement saying ‘We can officially say our cases are space-tested’. Nuff sed! Aside from this being an obvious publicity stunt for the case makers, who I’m sure, have people lining up around the block to buy their wares, the stats on Apple’s iPhone 6 fan following have most assuredly jumped higher.