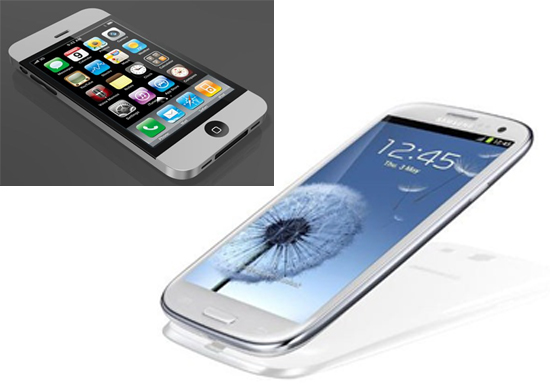 iPhone 5 or Samsung Galaxy S III? This will make it simpler

The question of which of the two superphones of 2012 should you buy will crop up in your mind in you aren’t an Apple fanatic, an Android minion or want to get into the whole smartphone buzz that everyone’s talking about. So do you dig the Samsung Galaxy S III that’s already out or gamble with time and go in for the iPhone 5?
The powerful: To start off with, the performance of the Samsung handset is unparalleled with the company’s new Qualcomm Snapdragon S4 processor in tow. Apple may most probably beef up the existing iPhone’s processing capabilities by adding the 4S’ A5 chip.
The beautiful: Apple surely have their way with looks. The iPhone 5 will give you the glassy texture that would pretty much meet all your tangible experiences. If you do not mind plastic or are sure to use a case of some sort then the Samsung Galaxy S III is the thing for you!
The brighter: Screens have been Apple’s fascination and strong point with their Retina Displays travelling to many of their devices. However, the Galaxy S III screen has earned its name as a brighter and richer display. It even has a larger, 4.8-inch display the may imp out the iPhone 5 display, effortlessly.
The gettable: The Samsung Galaxy S III will be available on T-Mobile, AT&T, Sprint, Verizon, US Cellular and C Spire. Apple will surely match up to this in some way or the other, roping in the more popular networks but that remains to be seen.
The affordable: There’s no doubt that the Samsung Galaxy S III are favorites in this domain. With the higher 32GB version available for $250 on contract. The iPhone 4S 64GB model did cost $400 on its own. Now that’s not too promising for a cheaper next rendition no?
At the end we would like to conclude saying that waiting is never a crime when it comes to buying phones these days. In fact, the S III may still be pretty much ‘in’ when the iPhone 5 rolls in and should it fail to impress.
PS: The choice is yours and yours alone. A lot of the iPhone 5 falls under speculation. And the images are only for representative purposes.