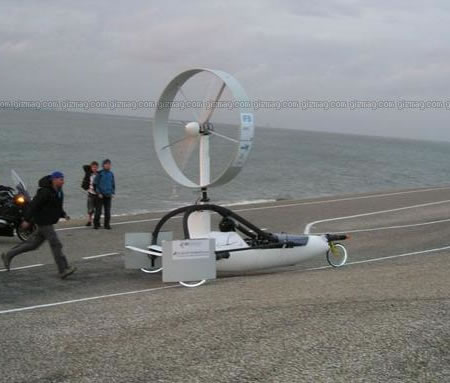 The idea of using wind power to propel us forward isn’t something new; we used it to push our boats for 100s of years before the automobile was invented. When it came to moving masses across vast spaces of land we were limited by horse or donkey carriages, which took ages to move things across. Sure, the Chinese had “wind-driven carriages” in the 6th century AD, during the Liang Dynasty, and eventually mounted masts and sails on large wheelbarrows. However, we can’t use the masts and sails to move around in our subways and under bridges. This has not stopped researchers in finding a wind-powered solution to our oldest problem since the invention of the wheel. The InVentus team have created history by winning the RACING AEOLUS 2008 competition the Stuttgart Ventomobile showed itself to be the lightest (just 130 kg) and most efficient vehicle and went on to take a clear win among six other European universities.

The North Holland Association of Technology Transfer (ATO-NH) is the intermediary for knowledge exchange in the field of sustainable energy technology. They think that a racing event could further their knowledge in the use of wind power for land based vehicles.
Source