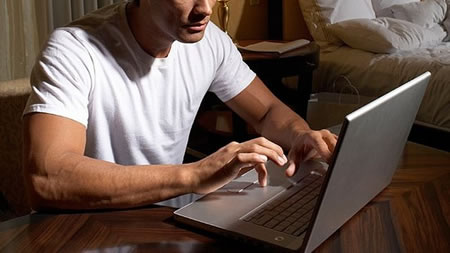 We knew that beyond a certain point internet addiction wasn’t healthly but researchers in China say that the magnitude of its after-effects isn’t as small as we expected. Just the way alcohol, cocaine, heroine, marijuana, methamphetamines and ketamine change your brain chemistry once you are addicted to them, Internet too can have the same effect on you. The Chinese researchers conducted brain scans of 17 men and women diagnosed with Internet addiction disorder, which is figured by answering “yes” to five of eight questions according to Forbes.

The folks at DVICE have give out three questions here for the sake of illustration like:
1. “Do you feel nervous, temperamental, depressed, or sensitive when trying to reduce or quit Internet use?”
2. “Have you taken the risk of losing a significant relationship, job, educational or career opportunity because of the Internet?”
3. “Have you lied to your family members, therapist, or others to hide the truth of your involvement with the Internet?”
The Independent also reports that 50% of the internet users have IAD. As scary as it sounds, we at least this problem isn’t all that grave and has a feasible solution. One can probably get stuff under control by cutting down on the amount of time they spend on their computer and instead involve in more outdoor activities. Something like this just serves a reminder that excess of anything is never healthy.
[Dvice]